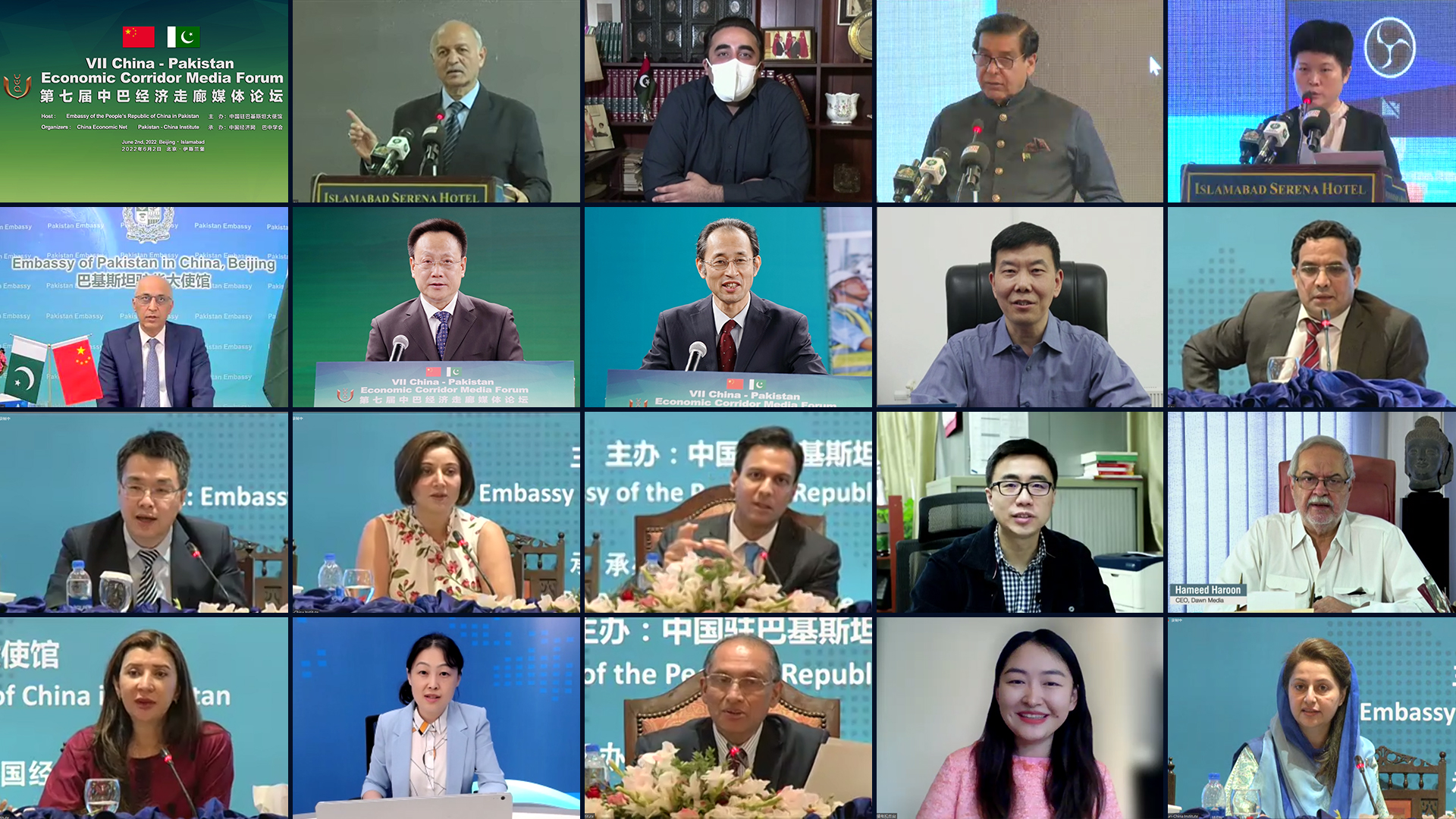 Senator Mushahid Hussain Sayed, Chairman Pakistan-China Institute made a welcoming remark, saying that in the last few years, the first phase of CPEC has been completed; 75,000 Pakistanis got jobs; about 10,000 megawatts electricity was added to the national grid… CPEC has united Pakistan through infrastructure development and industrial development and it also led to women's empowerment and changed the lives of marginalized people of the poorest area, he added.

Nevertheless, he noted that there are certain voices coming from some western countries which talk of containment of China. “We reject such talks and mindsets. Journalists in both countries and other journalists should unite to promote the truth about CPEC.”

H.E Bilawal Bhutto Zardari, Pakistani Foreign Minister, conveyed a video message to the forum to wish it a big success, adding that Pakistan-China relationship is indeed a special relationship that has no parallel in contemporary international relations. He also expressed his sincere thanks to the participants and all the friends in China and Pakistan for their efforts and contribution to promote China-Pakistan relations and CPEC.

Addressing the meeting, Raja Pervez Ashraf, Speaker National Assembly and Chief Guest of the forum, emphasized the resilience of CPEC despite the COVID-19 pandemic. As CPEC moves forward, the exchange of news and journalists’ interaction between Pakistan and China will be the need of the hour, he added.

H.E Pang Chunxue, Charge d'affaires of the Chinese Embassy in Pakistan, noted that under the strategic planning of Chinese President Xi Jinping and with joint efforts of the two governments, enterprises and all sectors of society, CPEC has achieved fruitful results and entered a new stage of enrichment and expansion. The two sides have initiated or completed 46 of the 70 early harvest projects with a total investment of 25.4 billion US dollars, she added.

However, false propaganda and disinformation on CPEC are on the increase. Hostile forces are trying to undermine the development of CPEC, as well as unity and mutual trust between both countries. Thus, she hoped that media of China and Pakistan could continue to adhere to the principle of objectiveness and fairness, use fact-based reports and comments to expose and refute lies, and show the world the truth of win-win cooperation and high-quality development in CPEC.

H.E.Moin ul Haque, Pakistani Ambassador to China, pinpointed that the friendship between Pakistan and China is not merely the result of convergence of bilateral interests but also determined by geography, history and culture.

“Our media, therefore, needs to play a crucial role to help nurture our historic ties, educate our peoples, tell stories of friendship and continue advancing new and innovative ideas for achieving a shared destiny,” he said, appreciating media organizations and journalists from both countries for widely publicizing Pak-China cooperation and spreading the message of friendship in today’s Digital Age.

Zhao Zizhong, Vice President of Economic Daily, said, “At present, we are undergoing historic changes in the world. Unilateralism, protectionism and hegemony are on the rise. De-globalization is being trumpeted, and destabilizing factors in the international situation are increasing. Under such circumstances, China-Pakistan cooperation is also under challenge.”

Therefore, he pointed out that it is the bounden duty of the media to clear up fallacies and distinguish right from wrong. A sound public opinion environment is needed to advance CPEC projects in a safe, smooth and high-quality manner, he further said, adding that propose media staff should seek truth, harmony and innovation in the new era.

Tian Yuhong, Executive Secretary of the All-China Journalists Association, addressed the forum via a video. He said, as the international situation gets more complicated, it is all the more necessary for the media of China and Pakistan to strengthen cooperation.

Since the Internet is playing an increasingly important role in enhancing mutual understanding among civilizations and enhancing people-to-people exchanges, he suggested that both Chinese and Pakistani media should pay attention to this emerging tool and should understand the thoughts and mentality of Generation Z to make content attractive to the youth.

During the forum, media representatives from both countries were briefed on updates of CPEC Phase II by CPEC JCC representative. Also, discussions were held on “Pakistan, Global Development Initiative, and the Role of Media” and “Give Scope to Media to Objectively and Fairly Report CPEC”.

On the occasion, Cui Jun, representative from China Economic Net presented China-Pakistan Economic Corridor: Stories Behind, a book compiles the stories of CPEC builders and records how, with the joint planning of the leaders of both countries, Gwadar Port becomes a shipping hub with increasing throughput, how Chinese engineers build wind power stations in Pakistan from scratch, how Chinese agro technology enters Pakistan, and how people of China and Pakistan have forged deep friendship through their work.

He noted, “This book is published not only to commemorate the hard work and dedication of CPEC builders, but also to remind people that the achievements of CPEC today have not come easily and more efforts are needed. Here, I look forward to closer cooperation between Chinese and Pakistani media.”

An award ceremony of the 4th "CPEC Communication Award" was held at the end of the forum. Totally 4 media staff, namely, Muhammad Asif Noor, Tahir Ali, Hafiz Tahir Khalil, and Syed Kamal Hussain Shah, were awarded the prizes for their contributions in strengthening CPEC and China-Pakistan friendship.

Themed “Enhance New Media Cooperation to Depict the Multidimensional and Comprehensive CPEC”, the forum was jointly organized by the Pakistan-China Institute (PCI) and China Economic Net (CEN). After 7 years of development, CPEC Media Forum has now grown into an indispensable exchange platform for the Chinese and Pakistani media with the biggest influence and most remarkable achievements.