XIANYANG, May. 27 (China Economic Net)- “As a large agricultural country, about 65-70 percent of Pakistan’s population depends on agriculture for their livelihood. Compared with traditional crops such as wheat, maize and cotton, fig, as an emerging cash crop, can obviously play a greater role in promoting farmers’ income. At present, we have carried out a small-scale fig soil environmental improvement experiment to adopt the “actinomycetes + biochar” fertilization mode, which has achieved remarkable results,” noted Dr. Abdul Ghaffar Shar, Researcher of Yangling Fig Research Institute. His viewpoint was echoed by Eric Fang, Chairman of Yangling Fig Industry Development Company Ltd, “In the future, in addition to simple planting experiments, we hope to bring a complete set of technical systems to Pakistan.”

“There are more than 20 varieties of figs in our demonstration garden, of which two most outstanding varieties have an average yield of 2 tons per mu (0.067 hectare). Besides, with a short growth cycle, they can be picked in just five months,” Eric Fang said in an exclusive interview with China Economic Net, “in fact, it is only the average yield of the first year of harvest, a few years later, the yield can reach a peak of 5 tons per mu.”
On the other hand, statistic from Pakistan Bureau of Statistics (PBS) shows that fig cultivation in Pakistan is about 875,000 hectares and the total production can reach 7,200,000 tons. With an average production of about 8.23 tons per hectare, the yield cannot meet the need of whole county, therefore, Pakistan imports a large number of figs from Iran, Afghanistan, Turkey and other central Asian countries. Boosting local production is arguably the top priority of China-Pakistan fig cooperation, obviously. 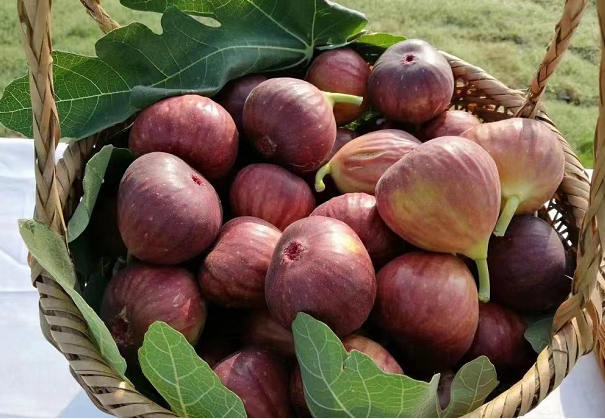 High-quality variety of Yangling Fig Industry Development Company Ltd [Photo provided to CEN]
“Considering that fig originated in Arabian Peninsula, Pakistan’s high temperature and abundant sunshine are already suitable for its growth. What we need to do is to promote the concept of “facility agriculture” here. Our facility greenhouses, water-saving irrigation systems and automatic control systems can well cope with the extreme climate that may occur. Temperature-controlled greenhouses can adjust the temperature whether it encounters high temperature or low temperature. If the local soil lacks one or several trace elements necessary for plants, integrated water and fertilizer system can replenish nutrients in time. And facing the shortage of water resources in Pakistan, Yangling has formed a complete set of targeted measures, precise control of water is no longer a problem with water-saving irrigation systems. If a branch of the Yangling Agricultural Demonstration Zone can be set up in Pakistan in the future, we can slowly evolve a complete planting system suitable for Pakistan based on local conditions, which has the lowest risk and cost. Kill two birds with one stone, it’s a win-win situation,” Eric Fang emphasized.

Dr. Abdul Ghaffar Shar in the Yangling demonstration zone [Photo provided to CEN]
Dr. Abdul Ghaffar Shar also mentioned the problems he encountered in Pakistan, “The abuse of chemical fertilizers is the most important factor in reducing yields. Most local farmers lack systematic agricultural knowledge so they believe that the more fertilizers are applied, the better the crops grow. On the contrary, it can increase the pests and diseases and reduce the yield. Instead of using pesticides and chemical fertilizers that are harmful to health, it is better to change the planting mode, like using new nutrients such as straw and biochar to achieve the effect of increasing yield and environmental protection.”
Besides yield, quality is also an issue that Yangling fig producing areas are very concerned about. According to Eric Fang, many varieties have reached a fairly high yield now, under this premise, the quality should be improved and the output value can be further increased, so as to increase income. China and Pakistan also have a lot of room for cooperation in this regard. “Not only introducing China’s superior varieties into Pakistan, but also improving the local fig quality.” Moreover, to increase the output value, industrialization is the only way.

Dr. Abdul Ghaffar Shar in the lab [Photo provided to CEN]
The reporter learned that apart from the existing by-products such as jam and dried fruit, Yangling Fig Industry Development Company Ltd has also developed fig cosmetics, including shampoo, shower gel, perfume, facial mask, and has cooperated with several biopharmaceutical company in Xi’an, Shaanxi Province to develop fig health supplements and medicines. Eric Fang told CEN, “Given that China-Pakistan cooperation requires complementary advantages, we hope to make full use of Pakistan’s advantages in land, labor, photovoltaic energy, and build a production center in Pakistan in the future. Because of the epidemic, we can start related online personnel training in Pakistan. Figs have high economic value and are highly processed, so except the fresh fruit, the processing industry is also promising. I believe the future of this industry is bright.”
As for Dr. Shar, it is his primary goal to use the advanced agricultural knowledge learned in China to benefit his hometown. He mentioned that in Pakistan, fig producing areas are mainly concentrated in the north. Pakistan has vast desert areas, and many places have sandy loam soils that are most suitable for fig growth, so he hopes that these areas can be fully utilized. What’s more, local farmers generally do not know much about the commercial value of fig by-products, and it is a top priority to spread relevant knowledge for them as soon as possible.

The fig deep processing by-products [Photo provided to CEN]
“Chinese farmers are using modern information and communication technologies to manage their farms. With the help of intelligent agriculture, such as big data, software applications and remote-control technologies, Chinese farmers can monitor field conditions without even going to the field. I think in the future, Pakistan and China will have more and more cooperation in that aspect under the framework of CPEC. I expect that the Pakistani government can unite the Yangling demonstration zone to launch a large-scale agricultural cooperation project to provide assistance to Pakistani farmers who do not understand the professional knowledge, so that they can truly realize the value of the fig industry.”
Information in this article comes from third party providers. This website does not provide explicit or implied warranty for such information and is not liable for any losses directly or indirectly caused by using such information.