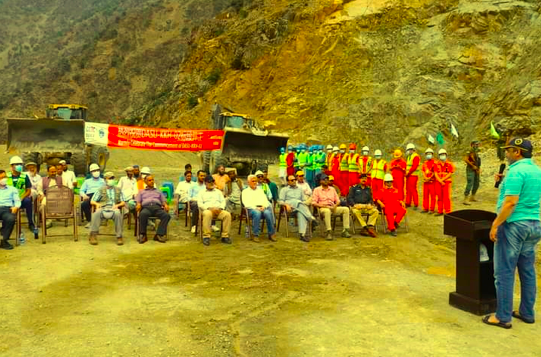 Ceremony held on the commencement of construction of KKH-02. [Photo/DHPP]

KOHISTAN, May 16 (Gwadar Pro)- The commencement of the construction of the 2nd phase of the relocated Karakoram Highway (KKH-02) under the Dasu Hydropower Project (DHPP) was held on Sunday.

Anwar-ul-Haque, General Manager and Project Director DHPP along with Deputy Commissioner Kohistan (Upper) commenced the activity in the presence of the senior officers of Water and Power Development Authority (WAPDA), consultants and Chinese contractors.

The proposed Dasu reservoir will be extended from Dasu dam site, located about seven kilometersnorth of Dasu Bridge, to the toe of Diamer Bhasha dam proposed about 74 km further north. The existing KKH, in a stretch of about 46 km, will be submerged in Dasu reservoir requiring its relocation to a higher ground. Another 10 km length of road will have to be rebuilt downstream of Dasu dam site to join the existing KKH located at a lower level with the new road relocated at the higher level upstream of the Dasu dam site. The total length of the relocated KKH will be 61.7 km approximately.

The relocated KKH has been divided into two phases i.e. KKH-01 (Part-I) and KKH-02 (Part-II). The first Phase is comprised of 25.200 km of relocated KKH plus a link road of 3.028 km, from the existing KKH at a lower level and joining with the relocated KKH at a higher altitude.

Phase KKH-01 will serve as a bypass to avoid interference in the construction activities at the dam site. China Gezhouba Group Company (CGGC) in JV is involved in DHPP Stage-I which is being executed across River Indus in District Upper Kohistan. The project will commence power generation in 2026 and will generate  4320 MW cheap and environment friendly hydel energy for Pakistan.