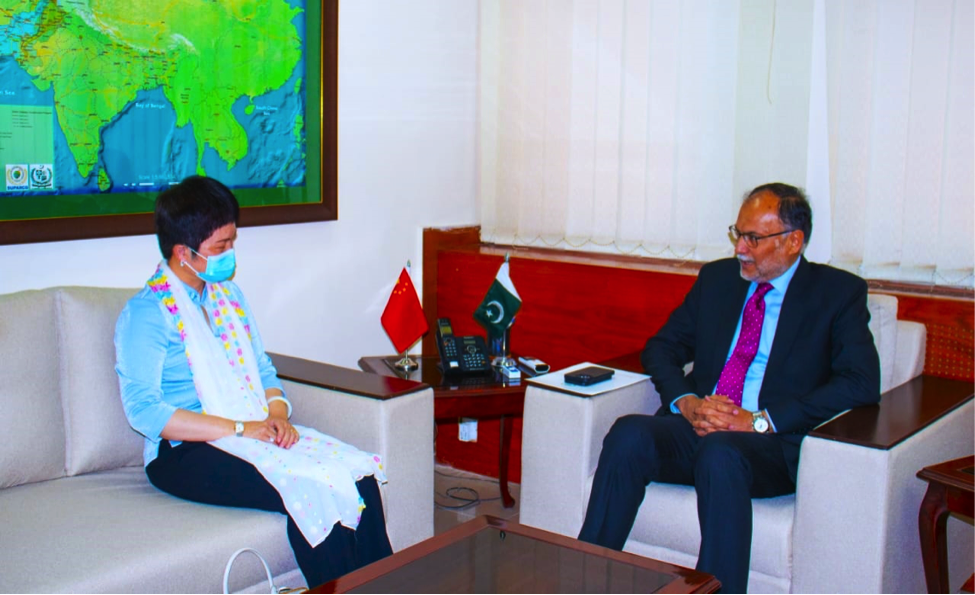 ISLAMABAD, Apr. 28 (Gwadar Pro) -“My top priority is to expedite the CPEC projects to restore the confidence of the Chinese investors,” said Federal Minister for Planning, Development and Special Initiatives (PD&SI) Professor Ahsan Iqbal during his meeting with Charge d'affaires of the Chinese Embassy in Pakistan, Ms. Pang Chunxue on Tuesday.

Mr. Iqbal told Ms. Pang Chunxue that the progress in China-Pakistan Economic Corridor (CPEC) has been expedited since the new government came into power and regular meetings are being held for the implementation of the projects.

Ms.Pang Chunxue appreciated the steps taken by the Minister since he took charge of the Ministry.

The Minister stressed that the incumbent government will maintain the lasting working relationship with China in the same spirit as it was in 2013.

Ahsan Iqbal also urged the Chinese official to resolve the issues of Pakistani students studying in China. In this connection, 200 students are being issued visas so that they can complete their studies in China.

Similarly, the Minister also suggested that Pakistan and China should start working on space technology and said that Pakistani astronauts should be given the opportunity to go to space with Chinese. This act will further take the relationship between the two countries to new heights higher than the skies, he added.

The Minister also pointed to the shortage of water in Karachi and asked the Chinese official to collaborate in establishing desalination plants in the city to overcome paucity of clean drinking water. Ms.Pang Chunxue assured to extend full support of China to uplift the water related projects.