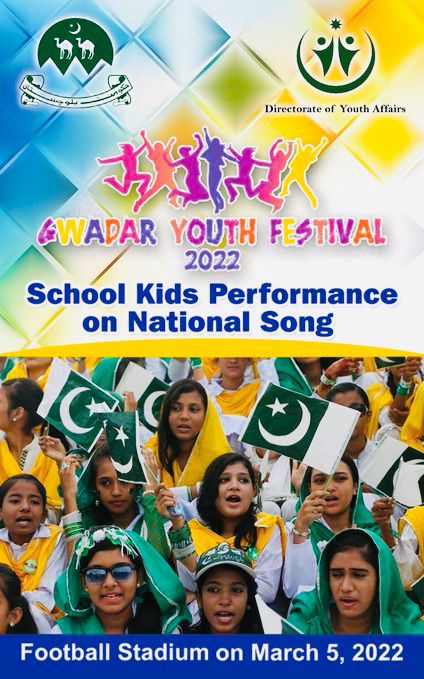 GWADAR, Mar.7(Gwadar Pro) - The three-day Gwadar Youth Festival has attracted a large number of youngsters of both genders to participate in sports and various healthy competitions organized under the gala to engage the young folk in positive activities.

The festival was organized by Balochistan Sports Department with the help and support from the local government where a large number of schools participated and installed their stalls including a stall set up by 30 FF Battalion, said an official statement.

The festival offered a variety of activities to partake including a beautiful display of fireworks, a singing contest of Balochi and Urdu songs, tableau presented by school children whereas souvenirs were given to Secretary Sports, Commissioner Makran, Deputy Commissioner Gwadar, and to MPA Lala Rashid. Moreover, Balochi Chap (Cultural Dance) was performed by students of Army Public School.

Around 3000 male and female participants attended the event for two consecutive days of the festival which would continue till 7th March where the security was provided by local police.

The second day of the festival commenced with a debate competition on Sunday at Baba Mir Ghaus Bakhsh Bizenjo Football Stadium in which a large number of people participated.

The majority of them were young men and women who took a keen interest in the Youth Festival. On the second day of the Gwadar Youth Festival, different interesting and colorful events and competitions were held including science models, wall painting, tableau or dramas, declamations, speech contests, Balochi Culture Competition in which students from public and private schools, Girls and Boys Colleges, Gwadar University and other educational institutions from all over Balochistan participated.

The chief guest for the second day of the festival was Special Secretary Sports and Youth Affairs and Commissioner Makran Division Shabbir Ahmed Mengal flanked by Deputy Commissioner Gwadar Jamil Ahmed who visited various stalls and expressed keen interest in the models put on display stalls.

On the occasion, the Commissioner stated: “The Gwadar’s youth have the capacity to participate in such activities which will be promoted further, as by promoting sports, the young generation can be saved from negative activities.”

“There is no doubt that our youngsters have immense talent and abilities to compete in sports. It promotes positive and constructive thinking which leads to a total change and prosperity in the society,” he added.