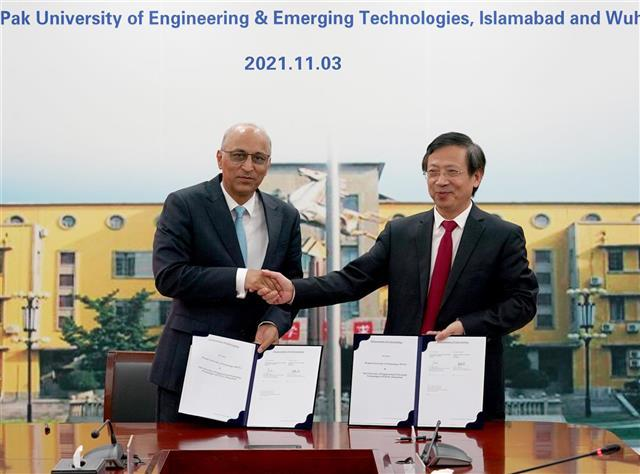 WUHAN, Nov. 5 (Gwadar pro)-Pakistani Ambassador to China Moin ul Haque attended a signing ceremony of the Memorandum of Understanding recently on establishing an Artificial Intelligence Center of Excellence in Pakistan.

The center will be jointly built by Wuhan University of Technology (WUT) and Pak University of Engineering and Emerging Technologies. On April 8 this year, Haque led a delegation to visit WUT and exchanged views on the construction plan of the two universities.

While addressing the signing ceremony, Haque said that there are more than 40,000 Pakistani students nationwide in China, including 1,000 in Wuhan. “Educational cooperation between the two countries will not only help Pakistani students in their careers and studies, but also help achieve high-quality development of China-Pakistan Economic Corridor,” said Haque.

Haque also expressed his hope that the MOU will serve as a new starting point for the educational cooperation between China and Pakistan. He said that the center will further strengthen bilateral cooperation in emerging technologies and also open new avenues for high quality development of science and technology, talent cultivation and high-end research.

WUT Party Committee Secretary Xin Sijin welcomed Haque’s delegation and said that educational cooperation is a solid cornerstone of CPEC. “On the occasion of the 70th anniversary of the establishment of diplomatic ties between China and Pakistan, we will take this opportunity to vigorously promote our cooperation with Pakistani universities”.

“WUT attaches great importance to the cultivation of Pakistani students and has signed cooperation agreements with several Chinese state-owned enterprises to jointly cultivate international students from countries and regions along the Belt and Road. In the past five years, WUT has recruited a total of 173 Pakistani students mainly majoring in engineering technology and management,” said Xin.

As the project leader, Dr. Atta ur Rahman, Chairman of Pakistani Prime Minister’s Task Force on Science and Technology, expressed his gratitude to WUT online for its strong support to Pakistan. He believes that the center will focus on emerging technology and turn breakthroughs in science and technology into actual productivity and benefit the two counties’ social and economic development.

During his visit in Wuhan, Ambassador Haque and his delegation also signed an agreement on establishing sister-province relations between Hubei and Sindh Province, inaugurated China-Pakistan Friendship Square, and signed several cooperation agreements with other universities in Hubei.