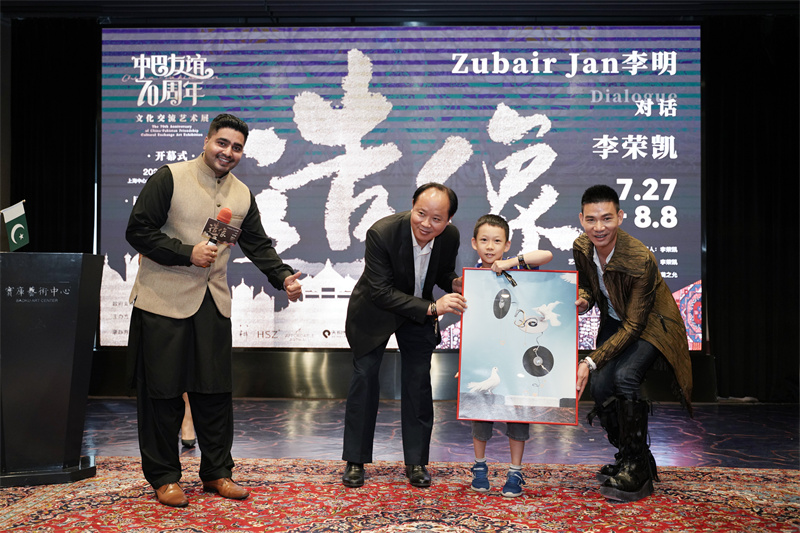 Guests at the opening ceremony [Photo provided by Li Rongkai]
An exhibition themed “Image-Making” opened in Shanghai center at Baoku Art Centre recently to mark the 70th anniversary of the establishment of diplomatic ties between China and Pakistan.
With Pakistani carpet art collection, Chinese contemporary paintings and images as carriers, the exhibition aims to carry out dialogue between two ancient civilizations of silk road, reveal the connotation of "community with a shared future for humanity", and provide inspiration for the development of art globalization in the new era.

Hussain Haider (L1), Consul General of Pakistan in Shanghai addresses the opening ceremony. [Photo provided by Li Rongkai]
"I am very happy to see such an exhibition and I would like to thank the organizers for promoting cultural exchanges between China and Pakistan. The year 2021 not only marks the 70th anniversary of our bilateral friendship, but also the 100th anniversary of the founding of the Communist Party of China. The government and the people of Pakistan all highly esteem of the contribution of CPC in serving its people wholeheartedly and hope that in the future, the development of the two countries will go further and reach a new climax," Hussain Haider, Consul General of Pakistan in Shanghai addressed the opening ceremony.
“Handmade carpet is one of Pakistan's cultural treasures. Pakistani handmade carpets are made of wool and silk, with exquisite and varied patterns. Along the ancient Silk Road, Chinese merchants exchanged silk for wool carpets in Pakistan. After the handmade carpets were introduced to China, Chinese weavers combined Pakistani weaving techniques with traditional Chinese craft of hand-knitting carpets. This is a kind of cultural interaction,” said Zubair Jan, one of the exhibition designers and a collector of the Pakistani carpet art pieces.

Li Rongkai (R1) and Zubair Jan shake hands [Photo provided by Li Rongkai]
The video and part of photography works on display were created by Li Rongkai, a photographer and director of art films in China, also the curator of the exhibition. He hopes to present a wonderful dialogue between Chinese and Pakistani art through narration, visual presentation and multimedia interaction.
“The different histories, cultures and social systems are as old as human societies, and they are the inherent features of human civilization. Due to the different cultural backgrounds, the art exhibitions of China and Pakistan show their differences. Therefore, we adhered to the philosophy of seeking harmony without uniformity while preparing the exhibition,” said Joshua Gong, academic adviser of the exhibition.

Li Rongkai, Zubair Jan and Dr. Joshua Gong (R2) with kids [Photo provided by Li Rongkai]
“There will be no human civilization without diversity, and such diversity will continue to exist for as long as we can imagine. We should respect each other, and seek common ground while reserving differences,” Gong told China Economic Net.
“In the future, we can also conduct in-depth cultural exchanges in all directions by holding forums, academic seminars, co-producing documentaries and releasing publications. We hope to continue to enhance mutual understanding and interaction, so that cultural practitioners from both countries can unite closer,” Gong added.
According to the organizers, the exhibition was moved to the Pakistan Persian Art Gallery in Jing'an District at Weihai Road 688 on August 9.